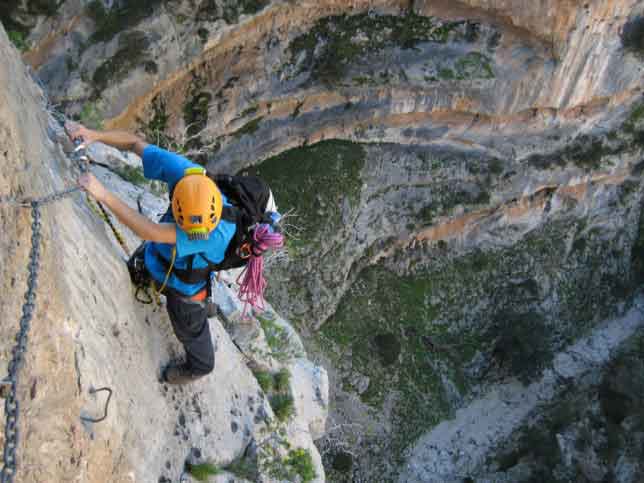 All the Via Ferrata in Sardinia

As Via Ferrata have recently become “a thing per-se” and their number keep increasing, we thought about creating an article to list and briefly describe all the via ferrata in Sardinia. Separated from their original link to the Italian and Austrian Alps, Via Ferrata are cropping up either to overcome difficult passages or just to enjoy spectacular scenarios.

Interactive Map of All Via Ferrata in Sardinia

BIG WARNING though. In order to go on any Via Ferrata you must possess all the necessary equipment (harness, helmet and a Via Ferrata Set) and know well how to use it. Please do not improvise. The slightest accident or inattention could lead to death. There are many Guide Alpine and local associations that offer their professional knowledge in guiding novices to enjoy in total safety these beautiful routes.

The Ferrata di Us Piggius di Plumare was equipped in 2001 by Sebastiano Cappai, member of the association GEA from Nuoro. This was part of the project named Trek delle 7 Cale, which aimed to create a panoramic path to link Cala Sisine, Cala Biriala, Cala Mudaloru, Cala Mariolu (Ispulighedenie), Cala dei Gabbiani and Cala Goloritze.

The path starts in Cala Sisine and runs north to south, in opposite direction to the famous Selvaggio Blu. From the beach, it takes about 2 hours to walk towards the great wall of Plumare, where the alpinistic route starts. On a narrow ledge the most exposed and dangerous passages are protected with a cable, but using an additional rope is recommended. The most exposed passage is about 30 meters long. At the end of the ledge, it is required to climb down a IV grade to reach the anchoring point to the first abseil (35m). Walking 10 meters on the ledge below the second abseil (55m) takes to the path of the Selvaggio Blu, which will go back to the starting point. Following this path north there are two additional IV grade drops to climb or abseil. One more abseil (45m) takes to the thick wood below. Walking on the same elevation it is possible to reach a short ledge with the last abseil (20m) that takes to the Cuile Piras. From the Cuile the large path takes back to the beach (50 minutes).

From the parking to the Grotta Sa Oche (Oliena) it takes about 40 minutes to walk to get to the start of the Ferrata di Badde Pentumas. Once in the amphitheatre, a few zigzagging on the slanting ledges and a short scramble takes to the real start of the Via Ferrata, on an exposed and very high passage. This is a truly spectacular Via Ferrata, with no sight of the sea, much in the style of alpine originals.

To access the Via Ferrata del Cabirol it takes 15 minutes to walk from the parking spot and it is easy enough to be enjoyed by anyone in a good physical and mental shape. The Ferrata runs on two parallel horizontal ledges for about 200 meters,  requiring a 25 meters protected climb to pass from one to the other. It can be started from either the lower or the higher ledge, making it probably easier for novices to climb -rather than downclimb-.

The Via Ferrata della Regina is situated on the north side of the crag below the town of Monteleone Rocca Doria. This crag is renowned for its panorama and the many climbing routes that were equipped on its west side. It is a purely independent Via Ferrata and it takes up to 3 hours max to complete its 600 meters. Only about half of its length is equipped with steel cables as the rest can be easily walked.

The Ferrata della Regina has a hard starting point on an overhanging section of the crag. It is all equipped but it takes some “balls” and arm strength to hold on to the steel ladder. The vegetation can be very annoying during some passages but the higher ledge offers some panoramas that will make up for all the sweat. Furthermore, it also has a Tibetan Bridge, probably the one and only in Sardinia. More info (Italian only) can be found on the website ferrataregina.it

The Via Ferrata degli Angeli is part of Abeautiful trekking that leads to the summit of the island of Tavolara. The Ferrata is short and -as opposed to Ferratas such as the Cabirol, Regina and Medusa– represents only a section of the whole trekking.

Starting from the port below, it takes 3 hours to walk to the top, passing from exposed and panoramic passages. The trekking is graded EEA, recommended for Experienced Excursionists with knowledge on Alpinistic techniques. When reaching the small statue at 563 m a.s.l. the land and the sea below begin looking incredibly distant as if they belong to a different reality.

NB: The Local administration closed the Via Ferrata di Giorré in 2015, due to an unstable rock.

The Via Ferrata di Giorré is located on a crag about 4 miles south of Sassari, in the north of Sardinia. The nearest town is Cargeghe, but you can see the precise location on the map at the bottom of this article.

This Ferrata, just like many other in Sardinia was created by Corrado Conca and runs on a high ledge of the crags that limit the plateau of Cargeghe. This ledge is very large in some sections, but gets narrower and even disappears in other sections. It takes about 3 hours to complete and has medium difficulty, with a spectacular view on the rocks and land that characterize the internal side of north Sardinia.

The Via Ferrata della Medusa goes around a crag near Samugheo, where the ruins of the Medusa Castle still dwell. This is a short and panoramic Via Ferrata that overlooks the Araxixi river, gently meandering among the green vegetation far below. Starting close to the parking lot by the (abandoned) structure by the Castello della Medusa, the Via Ferrata starts with a 3 meters climb and settles on a panoramic ledge. A vertical ladder determines the difficulty of this Via Ferrata, forcing the necessity for some arm strength.

The Via Ferrata di Pan di Zucchero is located on the sea stack Pan di Zucchero, in Masua. It runs from the base, where dinghy can dock, up to the top at 133 m  a.s.l. From the top, it is possible to have a little stroll, abseil to climb the famous DIDI, or get back to the dinghy by a 45 meters abseil.

The Via Ferrata di Pan di Zucchero is among the easiest ones in Sardinia and is immersed in a very pleasant scenario. It takes a 1-minute ride on a boat to reach the starting point, which needs to be booked in advance with the guys at the Warung Beach Bar located just on the beach in Masua. They also rent out Via Ferrata sets (€20) for those who intend to do it without a guide.

It comes without saying, it is not possible to approach the Via Ferrata di Pan di Zucchero on a bad day with nasty waves

THIS VIA FERRATA WAS DISMANTLED!!

The Via Ferrata di Masua is located on the 200m high wall above the mining site Porto Flavia. Do not confuse this one with the other Via Ferrata at the stack in Pan di Zucchero, they are 2, and very near to each other.

The Via Ferrata di Masua was mysteriously created around 2017 by an unknown group of usual locals… 😉 on a SIC protected site, with the obvious complaints from all administrations and nature associations.

There is no sign, no path and no clear indications about this Via Ferrata and we put it up on this article just for the sake of enlisting all the via Ferrata in Sardinia. We currently don’t even know the actual conditions of the cables and the anchoring points, thus AVOID THIS VIA FERRATA!

The Via Ferrata di Goloritze (aka Ledere di Goloritze) is NOT a touristic Via Ferrata but a wild and even harder variant of the famous trekking Selvaggio Blu. In order to avoid the difficult passage of Boladina, a group of guides lead by Marcello Cominetti has equipped in 2015 this short Via Ferrata to reach the Ledere di Goloritzé, continuing the trekking towards Ispulighedenie (aka Cala Mariolu). Reaching the Via Ferrata is not easy, it ends soon and to get out of there and reach the beach is truly hard. Only do this if you are tired of your life!

The shortest way to reach Cala Goloritze is from the plateau Il Golgo, above the town of Baunei. The beach lays on a 1-hour walk away, walking on a steep path recently rebuilt by the local administration. From here the path goes north, either on sea-level or a higher path which connect at the northern end of the beach. Once terminated the Via Ferrata it is possible to abseil to Ispulighedenie or continue to the west-side return path.

The Via Ferrata of Gutturu Xeu is a short and easy ferrata created fairly recently by the Associazione CISSA (Centro Iglesiente Studi Speleo Archeologici) on a small canyon close to Iglesias.

It takes only 15 minutes walking to reach the start from the parking lot and 2 hours to complete it. The main attraction of this Ferrata is definitely the exciting cable-way that connects one side of the canyon to the other. Although easy, it is not recommended to practice it without an experienced guide.